skip to main | skip to sidebar

Something has nagged me for the last week or so. It has to do with the child health care bill that Bush vetoed. I just got angrier the more I thought about it, yet I couldn't pin point the exact why.
Then, I picked it apart. It wasn't one reason, it's many. So, this is my rant...

First, they are bitching and whining about the cost. Yet Bush's little Iraq war (remember "cake walk", "seen as liberators"...?) is costing the poor taxpayer hundreds of thousands per MINUTE! And that's just fine with them. I don't mean poor tax payer as in I feel sorry for them. I mean poor as in not wealthy. With the tax breaks for the rich, it is the poor and middle class that will pay. Besides, us evil smokers are the ones footing this bill, and I would pay happily for it.

Now, money aside, let's talk about the self proclaimed moral majority. These people want to banish abortion. They want abortion illegal, for any and all reasons. They insist stem cell research shall never be in their lifetime. Now, these hypocrites, demanding that you carry, birth and raise a child you can't afford, refuse to lift a penny to help that child. If a child's life is so damn important to these.... people, then why is caring for their health so bad to them?

Don't even get me started on the Christian right!

Do you remember Bush calling Kerry a "flip-flopper"? If you do, you might remember the 2004 campaign where Bush himself rode the vote train on promising to pass a bill such as this one. Flop-Flip-Lie. In vetoing the bill, he made a statement that "The middle class wants a right of passage.." or something similar. Funny, I didn't think we had a middle class anymore.

Six years ago, I was doing well. My husband and I made about $100 or so a year. We had a nice little house and traveled, raised three sons... We were living the American dream. Now, six years later, we have two in college and one coastie. Both of the college boys are basically self supporting though we do help them with food and books and some odd expenses. We make about the same, kids all moved out and we moved down two steps on the "Class Meter". The cost of living has sky rocketed to the point that put us one step up over the poverty line. I can't even fathom starting with less six years ago.


The Right does not what health care for children to have a human face. They want to call themselves "kinder & gentler" but the fact is, that they are cold hearted. They want to talk about dying children as abstract theory. They resent the idea that we might say, "We are talking about real children and this what they look like." How else are we and the American people to keep our focus on the real significance and impact of the policies that we are discussing. The Republicans are outraged now, but they have no qualms about using children as poster children for their favorite causes like "freedom of no choice" and denying life saving stem cell research. That is perfectly okay.
Posted by Ziem at 8:02 AM 25 comments: 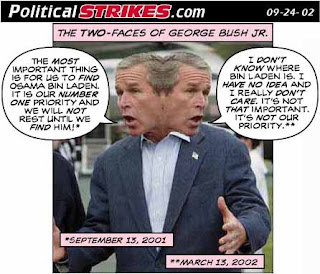 This WaPo article is about events BEFORE-9/11. BEFORE-9/11, President George W. Bush spied on Americans. BEFORE-9/11, before the so-called “war on terror,” the Bush Administration contacted communication companies and asked them for information about their customers. BEFORE-9/11, Bush was pushing for warrantless surveillance of Americans!

Stram, can't you just hear the gasps, pointing and name calling from Hank and his Anon alias now..??

A former Qwest Communications International executive, appealing a conviction for insider trading, has alleged that the government withdrew opportunities for contracts worth hundreds of millions of dollars after Qwest refused to participate in an unidentified National Security Agency program that the company thought might be illegal.

Former chief executive Joseph P. Nacchio, convicted in April of 19 counts of insider trading, said the NSA approached Qwest more than six months before the Sept. 11, 2001, attacks, according to court documents unsealed in Denver this week.

Details about the alleged NSA program have been redacted from the documents, but Nacchio's lawyer said last year that the NSA had approached the company about participating in a warrantless surveillance program to gather information about Americans' phone records.


Not only did the Bush Administration ask Qwest to spy on Americans, it punished the company because it refused to do an illegal act. The company lost "contracts worth hundreds of millions of dollars." One wonders whether the inside trading conviction was part of the "punishment" as well.

Now Bush has the audacity to tell Congress to pass a bill that gives immunity to companies that were "patriotic" and complied with the illegal request. Congress should encourage true patriotism, the kind that was shown by Qwest when it refused.

Congress does not even have the information it requested from the Whitehouse. It should do nothing until it gets this information. And then it must produce a law that protects American citizens from warrantless wire tapping.

All his talk about the "war on terror," making us safe at home and fighting for democracy abroad is just that, talk. Killing innocent Iraqi's and the slaughter of our brave soldiers is just his means to continue his evil ways. Of course he can get away with it! Hitler kept Germany afraid too...

Now tell me this isn't an evil, demented plan. Tell me that we should rally behind the evil empire and "allow them to protect us." My only question is... who's going to protect us from them?
Posted by Ziem at 5:55 AM 5 comments: 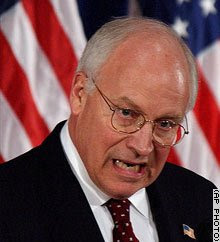 "Everything changed after 9/11."
"Live a clean life and you won't have to worry about spying and wire tapping."
"We aren't giving up liberties, we are being kept safe."

The list of ramblings from the right is much longer. I am going to stop there though, it's starting to make me gag.

I do find this most interesting. Despite the ranting of the afraid, would you believe me if I told you this secret government/wire tapping plan was hatched long before 9/11? Would the right?

I caught an episode of Frontline that made my flesh crawl. It was on the secrecy fixation of Cheney. It told of how he never writes anything down, refrains from email and voicemail. He, like the bad guys in the superhero movies, likes to move in the dark of night, disapear without an trace - leaving no trail to follow.

" they came in, spurred by Dick Cheney, to have an enlarged sense of the presidency, to have a penchant for secrecy, to basically have a view that the Congress, in effect, works for us, not with us; that we're the lead branch, not a co-equal branch. -- David Gergen

On this link, you can also watch the entire episode.... if you dare)

For three decades Vice President Dick Cheney conducted a secretive, behind-closed-doors campaign to give the president virtually unlimited wartime power. Finally, in the aftermath of 9/11, the Justice Department and the White House made a number of controversial legal decisions. Orchestrated by Cheney and his lawyer David Addington, the department interpreted executive power in an expansive and extraordinary way, granting President George W. Bush the power to detain, interrogate, torture, wiretap and spy -- without congressional approval or judicial review.

The downfall of this democracy began shortly after Cheney took office in 2001 and he won't stop, evidently, until the President of the United States has all the power of the dictators that they call evil - for doing the exact same thing.
Posted by Ziem at 6:44 AM 8 comments:

Labels: Corruption, Death of the Constitution, Domestic Spying, Shame on Them

Don't know who to vote for? Check out this little quiz and let me know how you make out.
Posted by Ziem at 11:29 AM 10 comments:

Enemy of the State

Show of hands.. How many of you saw the Will Smith movie Enemy of the State?

A tad far fetched? Not anymore.

It seems Executive Privilege, Homeland Security and Terrorist are more than just a blank check. It's as though under the guise of safety these true terrorists who reside in and frequent Washington DC are taking their cues from the movie.

A program to employ spy satellites for certain domestic uses has been postponed because of privacy concerns.

Congress had already provided money for the program, which was to begin this month. But some lawmakers demanded more information about its legal basis and what protections there were to ensure that the government was not peering into the homes of Americans. As a result, the Homeland Security Department is not formally moving ahead with the program until it answers those questions, a department spokesman said.

"..not formally moving ahead.." We all know what that means, it means we're doing it and flipping you off at the same time.

Let us all take a moment of silence for the death of our Constitution.

In talking with a right-winged friend about this satellite issue, her comment was, "If you live a clean life you have nothing to worry about." Don't we? Isn't losing our privacy something to worry about? What about the burned fragments of our Constitution?

Sometimes at night, my husband and I sit out on our back patio with a cocktail and chat about the days events. Do I care if anyone knows this? Nope. Do I care care if the government is watching me do this? You bet your sweet ass I do!

Enough! I am done giving up my civil liberties and rights that I, my father, brother, uncles and numerous forefathers fought to gain and protect. I'm tired of the scared and the true traitors (HANK). I am tired of the verbal civil war that this ass, who has the audacity to park a Bin Laden in the Lincoln bedroom, has created. I'm tired of being hated by the world for the few war mongers we have left. I'm tired of the way I have to fly because of the way I vote and what I say.

Scared? Yes I am. Not of terrorists. Of my own government and what it has done to my country and of what my countrymen have become. Frightened children who believe in a Strike First policy. Doesn't that truly define "Terrorist"?

The department would not say how long it planned to postpone the program. “We are cooperatively working with the Congress to answer any questions that they have,” said a spokesman, Andrew Lluberes. “We are totally confident that this is going to go forward.”
Posted by Ziem at 3:24 PM 8 comments: